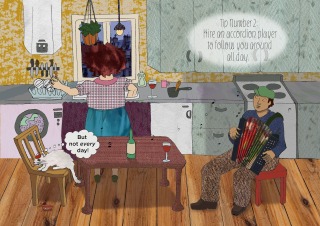 Here’s another finished illustration from my Plus France, Sil Vous Plait: Ways to be More French book idea.

Accordion-playing street musicians are definitely part of the fabric of Paris. I’ve heard their music playing at least once on each of my glorious trips to the City of Light. And any cliched or even sincere movie set in Paris just does not feel complete without accordion music played by a street musician wafting through a scene, or even for the entire soundtrack. (ex: Amelié; Midnight in Paris; Paris, Je T’aime; Charade … I could go on all night … please comment if you can recommend more!)

In honor of this fact, which I should find out the history of, I decided that if I was to hire a musician to play for me on my way to the market, while I’m eating dinner, or doing mundane tasks, it could bring me back to my fun times in France and it would add a Frenchie feeling to my Americane life. I’ve depicted this concept with Adele and Henrí in their kitchen and the accordion player that Adele has hired. Unfortunately Henrí doesn’t seem to be enjoying it so well since the accordion isn’t a very cat-friendly instrument.